Formation of the Solar System

Image below shows four equipotentials of a rapidly spinning 50 Jupiter mass protostar. The north pole is up. The south pole is down. The equator reaches orbital velocity.

Planets form 4 at a time from material spun off the equator. A pair of large planets and a pair of small planets.
At first all 4 of the planets are in the same orbit but eventually they end up in orbits that look like this: 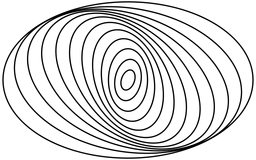 Over time the orbits are circularized.

Jupiter has four large moons too :

Only two issues:
1) One large body (Ceres) in the inner system is unaccounted for

2) Instead of having four moons Earth only has one moon

But these two issues partially cancel each other out if Ceres was originally a moon of Earth﻿.

Whatever struck Ouranos (this Collision most likely occurred when Ouranos was very close to the protosun)
Triton 2
Eris 1.67
Pluto 1.3 (Charon 0.16)

However the moons of Jupiter and the inner planets Earth Mars Venus Mercury were created by a different process. Gas and dust falling on to the equator of the parent world would have made its way to the poles where it would have been boiled off (T-Tauri wind). In the process it would have transferred nearly all of it angular momentum to that world and the dust would have rained out and formed a layer of lava. Eventually this lava made its way to the equator, which by then was spinning at orbital velocity, and formed four planets or moons.